With the passage of the consolidation measures in both the Rainier and St Helens Fire Districts, the Rainier Fire District ceased to exist in June of 2002.  Initially, the name used for the consolidated District was "St Helens-Rainier Rural Fire District.  In September, the Board of Directors voted to officially change the name of the new District to Columbia River Fire & Rescue.  At that time, the District had thirty-three career firefighters, fourteen career senior staff and administrative personnel, and sixty-five volunteers. 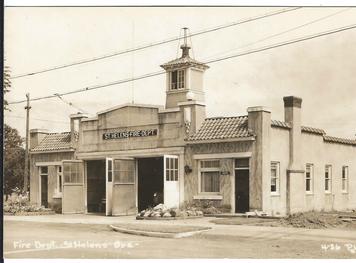 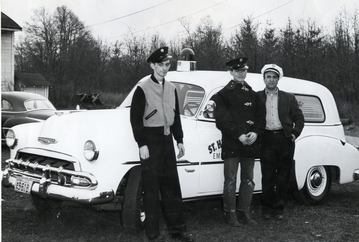 A big change in operations occurred in 1930 when the present fire station at South 12th Street and Columbia Blvd. was constructed to house both the fire and police departments.

Even bigger changes occurred in 1945 when voters outside of the city approved the formation of a rural fire district.  This new district was activated in 1946 as the St Helens Rural Fire Protection District.  At this time, the city firefighters responded to calls within the City of St Helens and Rural Fire District firefighters responded to calls outside of the city.  The following decades saw many changes and growth for the District.

In 1967 the Rural Fire District and the City of St Helens Fire Department merged to become the St Helens Rural Fire District.  In 1968, additional firefighters were hired to allow three shifts working the traditional 24 hours on duty and 48 hours off duty (56 hour work week).

In 1971, the city completed construction of a new police station on South 13th Street, and the Fire Department became the sole tenant of the current fire station.  By 1974 the St Helens RFD had grown its maximum area of coverage and employed three Chief officers, three shift Captains and nine firefighters.

History of the Rainier Fire District

​Rainier Rural Fire District had its roots in the early years of the City of Rainier and, like its sister City of St Helens, shares a rich history of timber and river-related commerce.  Rainier's Fire Department was a traditional volunteer operation for many years, dating from the earliest days of Rainier in the late 1800's.  The Fire District was officially formed in 1947 and contracted with the City of Rainier for fire protection.  Early records note that the city issued several reminders throughout the years that the Fire Department should limit its responses to properties within the City and the Rainier Rural Fire District, and not to everyone who called for their help.

By 1992, however, negative public sentiment towards nuclear power signaled the beginning of the end for the Trojan operation.  As the nuclear power plant phased down, so did the revenues from the site.  By 2001 the devaluation of Trojan had reduced to a point where the Fire District was faced with a very difficult decision; either it needed to layoff most of its career employees and severely reduce the levels of service it was providing, or significantly increase the level of property taxes to keep service levels where they were, or explore a merger with a neighboring fire district.  The Board of Directors chose the last option and contracted with the St Helens Fire District, who would assume operational responsibility for fire and emergency medical services for the Rainier area.  After one year of this trial operation, the Board decided to ask the Rainier Fire District voters two very important questions:  1.  Would the District voters support a tax levy to keep the District operating as an independent entity, or 2. Would the District voters support the consolidation of the Rainier Fire District into the St Helens Fire District.  This second question also appeared before the voters in the St Helens Fire District.  The first question failed to gain enough voters support, while the second question passed overwhelmingly in both Rainier and St Helens. 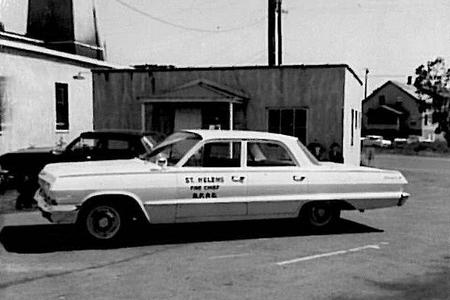 In this year voters approved a bond measure allowing construction of two substations and the purchase of two engines and two water tenders.  On July 1, 1975 the St Helens RFD hired twelve new firefighters to staff the new substations and immediately doubled the number of fire department personnel to three Chief Officers, three Captains, six Lieutenants and eighteen firefighters.  July 28th, 1975 marked the first day the substations were staffed and open for business. In 1979 the "Central Dispatch" group was formed and the Fire District no longer dispatched its own calls.

In 1980 a new tax base was passed and included funds to operate the ambulance service.  More personnel were hired to support this service.  In 1983 the St Helens Station on South 12th Street was remodeled, with completion in September of that year. A District mechanic was hired and a maintenance shop was set up in the old city shops behind the "main" station.  In 1986, a second mechanic was hired and the District began performing contract maintenance work for other fire districts.  In 1987, the District put its first fire boat, the "Dagmar", into operation for the Columbia River area.  The boat was staffed by a "jump company" (firefighters assigned to other areas until a call for the fire boat comes in).  This arrangement lasted until 2008 when the District Board decided the District could no longer meet the requirements for providing a fire boat and dropped this service.

In 1996 the Fire District and the City of St Helens built a joint maintenance facility on McNulty Way in St Helens.  This five bay facility was built on five acres of ground owned by the Fire Distrcit.  In 1997 the Fire District bought the old library on Columbia Blvd. and converted it into the Administration building.  At this time the District also added its "Care Car" service for transporting non-emergency patients to medical appointments.  This grew into a two vehicle operation over time and eventually came to an end in 2013.  At this time, the District has thirty-three career firefighters, ten career senior staff and administrative personnel, and over forty volunteer personnel.

The first fire station was located at the intersection of St Helens and South 1st Streets.  During the early part of the 20th century, there were as many as seven paid firefighters and many volunteers on-duty at this site.  The work regimen was usually 30 days on the job, followed by one week off.  According to interviews with some of the old firefighters of that era, the station on South 1st Street was a large two story wood building that housed the fire department, their apparatus, and some city employees.  The on-duty and volunteer firefighters lived in the building with quarters on the second floor, where there was also a large gymnasium for their use.  The sole engine in those days was a Brockway of uncertain vintage that carried a 55-gallon tank of soda/acid solution for fire suppression.  Known as chemical trucks, when the firefighters arrived they would mix the soda and acid solutions together.  The chemical reaction generated carbon dioxide (Co2) under considerable pressure and this pressure was used to push water through the fire hoses for delivery onto the fire.  Two new engines were added in 1929 that greatly increased the capabilities of the department.  One was a Studebaker with a 180 horsepower engine and the other was a Seagraves with a 150 horsepower engine. Both were pumpers, and coupled with the city's improved hydrant system, gave the department a much improved ability to fight fires.

​The City of St Helens Fire Department was formed in the late 1800's, a time when the city was a bustling hub of the timber trade,  By the early 1900's, St Helens was referred to as the "payroll capitol of the world" because of its  logging operations, shipyards, lumber mills, fishing industry, and busy deep-water port.  Due to this heavy concentration of industry, the fire department grew as a combination department utilizing both career and volunteer personnel from a very early date. 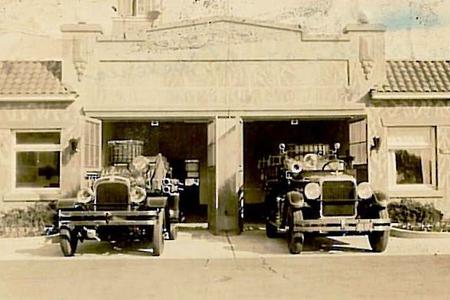